What is a noun?

A noun is a word which names a person, a thing, a place or an idea.

Have a look at this picture - the words we have for everything in the picture that we can name are nouns. 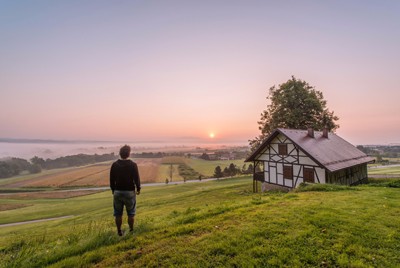 Here are a few of the things we can name:
All of these words are nouns.
So are all nouns the same? Should we clump them all together in our definition above and leave it at that? Or do different nouns have different characteristics? Can we separate or classify them in some way? Well, in fact we can classify them in quite a few different ways. Let's have a look at some of these now.
The first way we can classify nouns is as concrete or abstract.

The nouns we listed above, house, man, grass, sweater, sunlight and sky, are all concrete nouns. This means that we can perceive the things they represent with one of our five senses. So we can either see, hear, feel, taste or smell them. Here are some more examples of concrete nouns:

Abstract nouns are the opposite - we can't see, hear, feel, taste or smell the things they represent with our five senses. These kinds of noun are often ideas or concepts. Here are a few examples:

As well as being either concrete or abstract, all nouns are either proper or common. Proper nouns refer to a specific person, place or thing (and begin with a capital letter). Have a look at this sentence:

Mark has a very good friend called John, and they live in a small house near the Sydney Opera House. Their friendship is strong.

The nouns Mark, John and Sydney Opera House are proper nouns - they refer to a specific person, place or thing. In other words, we're not just talking about some random person or place, but we know exactly which specific person or place we're talking about. The nouns friend, house and friendship are all common nouns – they don't refer to a specific person, place or thing. Unless they come at the beginning of a sentence, we don't start them with a capital letter.
You may have noticed that we've seen a few of our examples more than once now. We've described:
So all nouns fit in to more than one category. They are either proper or common, and either abstract or concrete. Next we'll see two more "either/or" classifications.

So far we've seen that all nouns are either concrete or abstract, and either proper or common. The next either/or way of classifying nouns is into singular and plural. Most nouns can be either singular (only one) or plural (more than one). Have a look at these two sentences:

The baby held up one foot and waved her left hand.
Babies have two feet and two hands.

All of the nouns in the first sentence (baby, foot, hand) are singular. In the second sentence we have made them all plural (babies, feet, hands).

With most nouns we simply add "s" to say that there is more than one. With some nouns, though, there are different rules:
A lot of nouns don't follow these rules and have irregular plural forms, for example:
At the beginning of this section we said that most nouns can be singular or plural. There's a reason we didn't say that all nouns can be singular or plural, and it has to do with the last either/or classification, which we're going to see next.

The last either/or way to classify nouns is into countable and non-countable.
So what do we mean exactly by "nouns that we can count"? There's a very easy way to demonstrate this. Let's take the noun apple and see what happens when we start to count apples:

This seems to make sense - we can count apples in this way. But does it work with all nouns? Let's take another one, water, and find out.

This sounds a little strange - it doesn't seem like we can count water in the same way that we can count apples. So what's the difference between apples and water that lets us count one but not the other? Well, the difference is that we can't easily divide water up into individual units in order to count it. To do this we'd have to do something like put it into glasses, or think of it in drops:

Now it sounds better - but that's because we're counting glasses or drops of water and not water itself. Here are some more examples of countable and non-countable nouns. Try counting each of them and see if you agree with our classification:

Now, let's think back to the last section where we talked about singular and plural nouns. Can we make any sort of relationship between countable/non-countable and singular/plural nouns?

If we think about it, being able to count a noun must mean that we can have more than one of it (2 apples, 3 chairs). This means that countable nouns can be either singular or plural. But if we can't count something, this means that we can't make it plural. As we've seen, it makes no sense to add "s" to water and say "2 waters". So non-countable nouns can't be made plural. And that's why in the last section we said that most nouns can be made plural, not all nouns.

Nouns which are both countable and non-countable

Some nouns can be both countable and non-countable, depending on how we're using them. Have a look at these sentences:

I go to work every day.
The works of Van Gogh are astonishing.

I like sandwiches with cheese and lettuce.
Many different cheeses are made in the UK.

The same thing applies here. In the second sentence we're using "cheese" to mean individual types of cheese which, again, we can count. So unlike all our other classifications, which were very clear-cut, here we have to think a little more about how we're using the noun before deciding how to classify it.

Every noun has what we call a possessive form. This is the form the noun takes when we want to say that it "owns" something. What do we mean by this? Well, let's have a look at a few nouns:

Each of these nouns can own something or, if you like, have something that "belongs" to it. President Obama could own a dog, for example, the baby could own a toy and the caterpillar could (and probably does!) own some legs. So we could say:

But this is a quite long-winded way to talk about ownership, or "possession", so instead we can say:

This is President Obama's dog.
This is the baby's toy.
These are the caterpillar's legs.

Singular nouns not ending in "s"

To change singular nouns (and non-countable nouns) not ending in "s" to their possessive form, we add an apostrophe and an "s".

Some singular nouns end in "s". To change these to their possessive form we normally just add an apostrophe:

...although adding an apostrophe and an "s" is also okay:

The bus's wheels were dangerously flat.
Tess's children all lived away from home.

Plural nouns not ending in "s"

Remember we saw earlier in this lesson that some plural forms of nouns are irregular, like "sheep", "children" and "mice". To make the possessive form of these we add an apostrophe and an "s":

To make most nouns plural, remember that we just added "s" or "es". To make the possessive forms of these we just add an apostrophe:

Forming possessives is not the only reason we use apostrophes and "s". We also use an apostrophe and an "s" when we form a contraction of a word. A contraction happens when we make two words into one by replacing one or more of the letters with an apostrophe. So, for example, instead of saying:

John has been really helpful today.

...we would normally say:

What we've done here is combine two words into one, replacing the beginning of the word "has" with an apostrophe to make it easier to say. (In formal writing we don't normally use contractions).

Can you see how this use of apostrophe and "s" is different to a possessive form of a noun? Remember we use possessive forms of nouns to say that they own something. In the example above "John" doesn't own anything.

Let's move on now to the last two types of noun that we're going to look at - collective and compound nouns.

The team was playing well.
The farmer had a big flock of sheep.
The audience is cheering loudly.

The things these nouns represent are made up of many individual parts - the team and the audience are both made up of many people and a flock is made up of many sheep. But a team as a whole is one thing, as is a flock and the audience. So are these nouns singular or plural? Well, the answer is both, depending on the context and how you view them.
Let's look at the example of "the team" above. In this sentence they are acting together in unison (to try and win the game). So in this case we view the team as one thing and the noun is singular. But we can imagine that after the game the members of the team all go their separate ways and we could say something like "The team got in their cars and went home." The noun here is plural because the members of the team are acting individually, not in unison. (If it was singular we would have said "The team got in its car").

We make compound nouns by sticking two words together to make a noun. Some of these we write all as one word, others we write with a hyphen, and still others as two separate words:
Some of these, like football, we don't really think of as being made up of two words at all - they are used so commonly that our minds just "see" one word. For the two other types, how we write them often comes down to preference. For example, we could choose to write city-state or city state.
Most compound nouns are made up of two nouns, like "tablecloth" (table + cloth) and "housewife" (house + wife), or an adjective with a noun, like "whiteboard" (white + board). Some, though, are made from other combinations of words, for example a noun and a verb like "sunrise" (sun + rise), or a preposition and a verb, like "input" (in + put).

To make compound nouns plural, we add "s" if we write it as one word. If it is hyphenated or two separate words, we only make the word that there is more than one of plural.

That's all we're going to say about nouns at the moment, but we'll see them again before long when we talk about building clauses and sentences. For now though, let's leave our nouns and press on with the other parts of speech.

Here's a summary of the main points from this lesson.

There's a downloadable factsheet for nouns below.